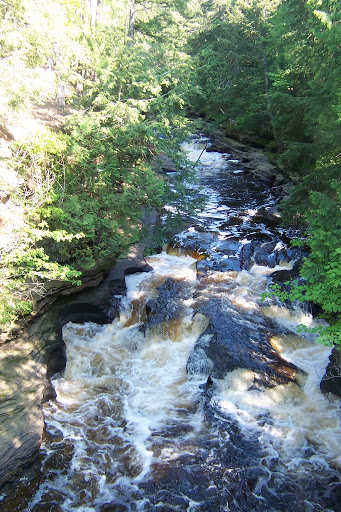 I used to call this an unnamed waterfall, only to discover that people have given it some type of designation. I’ve decided to refer to it as Pothole Falls, though some refer to it as The Potholes. This is one of the more widely photographed waterfalls/features in the park, even though it isn’t a very tall waterfall.

Pothole Falls is found downstream from the much larger Manabezho Falls (which is downstream from Manido and Nawadaha Falls). While those falls are larger, they are “normal” waterfalls. Pothole Falls is really more of a collection of potholes, formed as rocks caused deeper erosion in the river bed. And while the potholes are not particularly large, they are very photogenic. I visited in early June 2006, and there was still enough water flowing down the river to obscure some of the potholes. If you visit later in the summer, less water flowing down the river will likely be a good thing, as the potholes will become more prominent.

These should be very easy to visit. There is a nice trail system to the waterfalls along the Presque Isle River, and if you follow the trail downstream, there should be a bridge over the river where the falls can be viewed easily. When I visited in September 2010, I believe the bridge over the Presque Isle that would have provided the view was closed, so I’m not sure if that has been fixed. I would think so, but follow any posted signs. (In September 2010, I’m not sure I would have been able to see the potholes or the falls because the water level was extremely high…some of the highest levels anybody had seen, especially considering it was not spring.)

Where in the World is Pothole Falls?