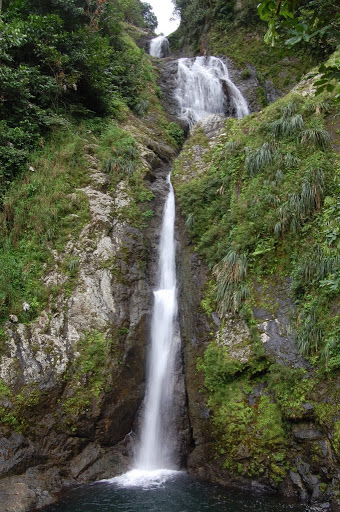 It’s been over five years since I’ve visited Puerto Rico and some of its waterfalls, so I’m hoping that most of my recollections are correct. I personally don’t know how many waterfalls are on the island, but I visited four during my time there. Three of them (Juan Diego Falls, La Coca Falls, and La Mina Falls) are found in El Yunque National Forest. The fourth, Salto de Doña Juana, is rather far away from El Yunque (in relative distance terms).

Salto de Doña Juana is a very nice waterfall to visit, though it is somewhat out of the way from many other destinations. Because of that, it tends to be relatively quiet, with only one or two other small groups visiting at any time. Compare this to the waterfalls in El Yunque, where you’ll usually be surrounded by many other people. Parking is rather informal, with areas to pull off on the side of the road. Luckily, when I visited, there wasn’t a huge amount of traffic. Because of all these traits, Salto de Doña Juana is a very nice waterfall. Whether you visit decide to visit will probably depend on how far out of the way you want to drive to see a waterfall…

Where in the World is Salto de Doña Juana?