I’m getting to write about the last waterfall stop on our road trip from Las Vegas to Michigan a few months after it started. Winter break has now arrived, and so I have some time to write about a few waterfalls before the next semester starts.

Williamsport Falls is definitely a popular waterfall, though it would be even busier if it were near a busy city. It’s found in western Indiana about 1.5 hours northwest of Indianapolis. It’s directly in the town/village/city of Williamsport. Once you find the parking area for the falls, you can view this impressive 90′ pretty quickly from above.

You can also hike down to the base of the falls, which we decided not to do since we had been traveling and hiking for a few days before this, and we just kind of wanted to get home. The view from above was more than adequate, and it was rather busy at the base. This was in early June, though the weather was a bit warm and humid in this area, which encouraged others to find an interesting water source…why wouldn’t you choose a tall waterfall?

Where in the World is Williamsport Falls? 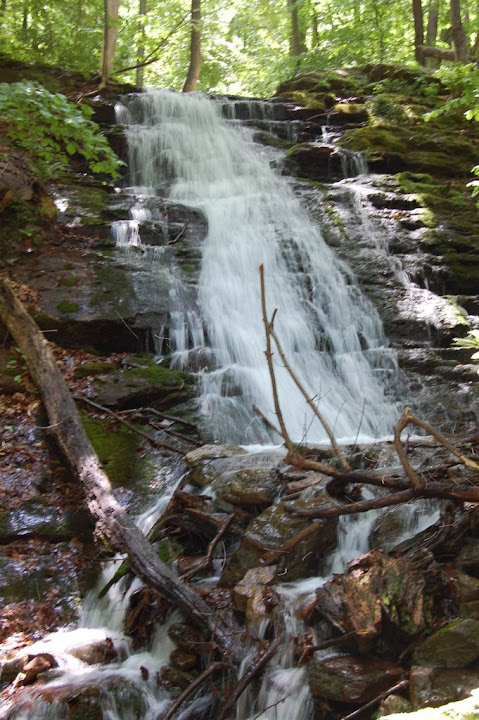 Lower Laurel Falls in May 2009

New Jersey is another one of those states where you wouldn’t necessarily expect many waterfalls, but there are surprising number of both tall and large waterfalls in the state. Lower Laurel Falls isn’t particularly tall or wide, nor is its upper brother, Upper Laurel Falls. The scenery is particularly beautiful, though, and that makes up for the size.

New Jersey’s border with the Delaware River is very scenic. It is more hilly (mountainous?), and it’s very enjoyable to drive down the roads that wind through the area. The Laurel Falls are found northeast of Stroudsburg, Pennsylvania, and are very easy to get to from that area. As you head to the falls, you’re actually travelling on a very old road that has been used to transport goods for hundreds of years. Once you get to Laurel Falls, you might not necessarily expect anything extremely exciting, but it’s definitely far more worthwhile than I originally imagined.

Where in the World is Lower Laurel Falls?

After trying to find the Great Falls on the Passaic and failing, I had some time to kill. I decided to head back to the Delaware Water Gap area and look for some more waterfalls right near the Delaware River. I was trying to find Laurel Falls and pulled off at the wrong area. As I was looking around, I realized there was a trail that started across the road from where I was and I also heard what sounded like a waterfall. This wasn’t recorded anywhere in the book, but I decided to take a look anyway.

I had parked in a turnoff right near the road leading to the visitors center for Worthington State Forest. I crossed the road, and started exploring. The first path I took did not lead directly to the best view of the falls, but I could tell there was a small waterfall a ways above me. I then walked back down to the road, and headed up a slightly steeper trail to my left. After trudging through a bunch of plants, I finally got a great view of this waterfall. I really like this waterfall, maybe because I found it by myself without the help of any book or map. It was unexpected, and the unexpected can be very cool.

An unnamed waterfall in Worthington State Forest (May 2009)

Where in the World is Unnamed Falls?

When I first tried to visit Laurel Falls and the other falls in the Delaware Water Gap, the weather thwarted my attempts. Some intense storms passed through. From what I had seen though, even when storming, I knew I had to go back and visit some of the falls on the New Jersey side of the Delaware Water Gap.

There are two falls, an Upper Falls and a Lower Falls. The Upper Falls has two drops separated by a very short distance. The walk up to the falls was just beautiful…there is just such a calming vibe that comes when walking to these falls. And while they’re not large falls, the falls here are still just as attractive as many other larger ones I’ve visited.

Upper Laurel Falls in May 2009

Where in the World is Upper Laurel Falls?