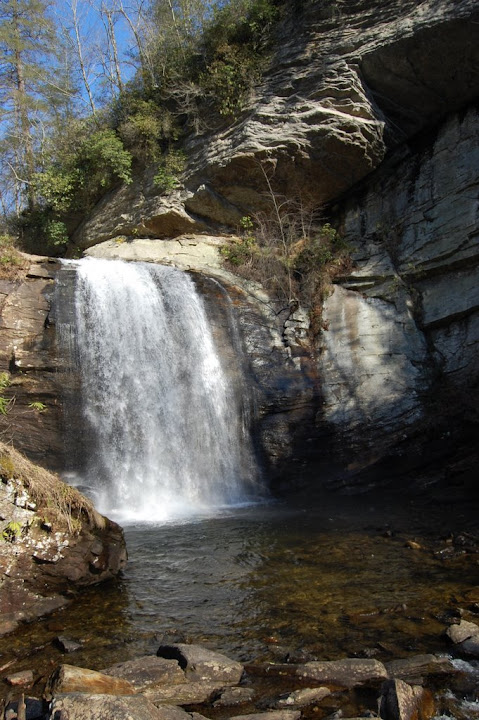 Looking Glass Falls just so happens to be one of my favorite waterfalls in North Carolina, though there are a number of other equally impressive falls in the state. Looking Glass Falls is found in Pisgah National Forest in the waterfall-infested Transylvania County. The first plus is that is very easy to visit, being found right off of US-276. The drive to the falls is amazingly beautiful, even in the time just before spring.

Once you get to the falls, you have two options. The first option is to view the falls without much effort. It is disability accessible when not going to the base. Even from this viewpoint, it’s impressive. If you have the option of heading down the base, you definitely should. From here, you can get some great shots of the falls. The rock hanging to the upper right of the falls is uniquely interesting, and the shadows that form on the falls make this a gem.

Where in the World is Looking Glass Falls?

Should I suggest visiting Batson Creek and Connestee Creek Falls? I don’t know. On the one hand, the falls are right off of US-276 and it is very easy to get to the “viewpoint.” On the other hand, the view is rather disappointing. I get the sense that there may be a better viewpoint somewhere else, but I’m not totally sure.

The current viewpoint blocks off most of the view of Connestee Falls. Looking on the internet, I’ve seen pictures of the falls, but I’m not sure how they got to view them. It seemed pretty blocked off to me. If you look in the picture, you can see stairs that lead down next to Batson Creek Falls, but I think those are blocked from use as they look pretty slippery and just abruptly end! It seems that a boardwalk was built after I visited, but still doesn’t allow for great viewing. From what I understand, the best views are to be had for those that are in the housing development in the area.

Where in the World are Batson Creek/Connestee Falls?

Of the three waterfalls you can most easily view in the Dupont State Forest in North Carolina, Hooker Falls is the easiest of those three to visit. High and Triple Falls both require hikes up a steeper hill, though they are still clearly marked. There are many other falls in the area, though the trails can become a little bit confusing.

Hooker Falls is also the smallest of the three falls, and many people may skip in favor of the other two more photogenic falls. I had a fun time, though, at Hooker Falls. The height of the waterfall is not that significant, but that apparently makes it a favorite of kayakers. When I visited in early March, there were two kayakers actually plunging over the falls. I was excited to use my newer camera to capture the image as they plunged over the falls. That’s the only waterfall that I’ve ever seen somebody kayak over, so it sticks with me.

Where in the World is Hooker Falls?

In DuPont State Forest in North Carolina, there are multiple different waterfalls to be found. Some of them are along more trails that are more complicated to navigate, but three are found along one of the main trails. Hooker Falls, Triple Falls, and High Falls are all found along the Little River.

High Falls is my favorite of the three falls, though each of them are great in their own right. Of the three waterfalls, High Falls is the most difficult of the waterfalls to get to along the river. Hooker Falls is extremely easy to visit. Triple Falls is more difficult because of the incline. After passing Triple Falls, you keep heading up the steep incline to High Falls, which means you will be tired out at the end, and your legs will be burning. Even so, it is definitely worth it!!!! If you continue on past High Falls, there are more waterfalls, though I decided not to do that.

Sometimes, a waterfall can be so close, and yet so far away. As you’re driving along US-64 in North Carolina, you’ll pass right over the Toxaway River only a few feet from the beginning of Toxaway Falls. There are no places to pull off on the road to get a better view, so give that idea up from the beginning. There is no place to stop on the one side of the river, so that’s also an issue. The only “view” is from a restaurant parking lot near the falls. You can’t get any closer to the falls because of private residences. Oh well, some waterfalls have to be nearly unobtainable. Who knows, ten years from now the view might be different.

Where in the World is Toxaway Falls?

I always have a hard time choosing favorites. I like most waterfalls that I’ve seen, and each of them has it’s own unique qualities, whether big or small. Upper Whitewater Falls has the distinction of being one of my favorites, though. It’s a big waterfall, but that alone does not make it my favorite. I’ve seen waterfalls that are bigger (Multnomah Falls), but that doesn’t mean that they’re my favorites. There is a complexity about Upper Whitewater Falls that puts it in the top ten.

At 411′ tall, it is one of the larger waterfalls east of the Mississippi River. It’s not a straight 411′ drop, but instead a series of drops that add up to the total. This is what makes Upper Whitewater Falls so beautiful. It’s narrow and then it’s wide, and then narrows down again. At some points, there are actually three separate “waterfalls”, or at least the river splits into three. In the picture below, you can’t even see the whole falls because it’s so large.

There are at least two easily accessible viewpoints. One of the viewpoints is right near the parking lot, while the second is accessed from a walk down some stairs. There may be a third viewpoint at the base of the falls, though I’m guessing that this is more complicated!

Where in the World is Upper Whitewater Falls?

If the view were not so advantageous, Triple Falls might be classified as three separate falls. But with Triple Falls, you see all three drops simultaneously from multiple different viewpoints. This makes Triple Falls one of the more popular waterfalls in the waterfall-infested Transylvania County.

Triple Falls isn’t necessarily that easy to get to. Let’s just say the walk back down wasn’t even that simple, even though I was going downhill. There is a clearly defined trail, but the trail is consistently steep in parts. It’s not the kind of steep that requires strategically placed ropes, but it is steep enough to wear you out. Unless you’re really out of shape, you should be able to do it, but plan to take a well-deserved break at the falls. If you love waterfalls or love the feel of lactic acid burning away in your calves, you can head even further up the trail to the equally spectacular High Falls. (Hooker Falls is on the opposite side of Dupont Road.)

Where in the World is Triple Falls?

Moore Cove Falls is a cute little waterfall. It’s just overshadowed by other waterfalls that are much larger and showier that can be found in the vicinity. The much larger Looking Glass Falls is very close by. Still, if you’re in Transylvania County looking for waterfalls, Moore Cove Falls is a good choice to stop and visit. It’s easy to visit and the hike to the falls is quick, fun, and not too strenuous.

And as I’m writing this, I’ve discovered there’s another smaller waterfall along the same trail to Moore Cove Falls, just a ways further…somebody’s decided to call it Little Moore Cove Falls.

Where in the World is Moore Cove Falls?

Cathey’s Creek Falls wasn’t impossible to find, just very tricky. For much of the way to the falls, you’re driving along a single-lane, dirt National Forest Road. It’s very curvy and inclined, so you have to drive at a pretty slow speed. This is the type of road that tends to stress me out, and I could feel its effects. You’re out in what seems like the middle of nowhere, and for most of the journey, there’s no real place to turn around. It can be very unnerving! In order to find the falls, I actually had to LISTEN for the falling water, as the falls are completely blocked from view on the road. Once you pull of the road, try to find the rather inconspicuous and steep trail down to the falls.

Cathey’s Creek Falls as a waterfall is actually very beautiful. Surrounded by rhododendrons, it was really a impressive view. Once you’re done visiting the falls, drive just a little bit further uphill, and if I remember correctly, there will be a bridge with an area that allows for easy turn around. Knowing there’s a place to do this beforehand may relieve some of the stress and allow more enjoyment at the falls!

Where in the World is Cathey’s Creek Falls?