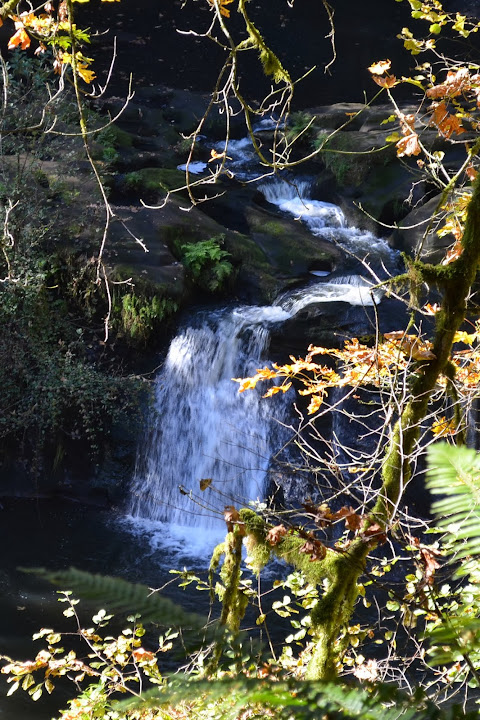 If you live in the Portland (Oregon) metropolitan area, you’ve obviously got a number of very impressively waterfalls to the east. But did you also know that there are some smaller waterfalls to the north, just across the Oregon/Washington state line? In the city of Camas, you can find Lacamas Park. It’s a very enjoyable park to hike around, even if you’re not planning on seeing any waterfalls. The terrain is relatively gentle, with only a few minor uphill portions.

I visited this in mid-October of this year, and it was probably the most pleasant weather I’ve experience in Portland. It was sunny and in the 60’s on both days. I don’t think that I had seen Mt. Hood on my previous two visits, which were in mid-Spring. Many of the leaves were beginning to change colors, so I couldn’t ask for anything better.

In Lacamas Park, there are three main waterfalls, and a smaller 3-4′ unnamed drop. Pothole Falls (aka The Potholes) is the first you would likely encounter. None of the signs scream out “The Potholes,” which might create some confusion as to the specific waterfall you’re visiting. Many signs point to the Lower Falls downstream. I had read that it was easy to view Pothole Falls, but found the opposite to be true (as you will see in the photograph). There was a rather steep trail down to the river, but you end up just behind the base of the falls, making it almost impossible to photograph up-close views. Maybe there’s some other path, but it wasn’t obvious what that safe path would be. (It was also suggested that it was more difficult to view Lower Falls, which again was the opposite case for me.) To get to the viewpoint in the picture, continue along the trail a short ways, and then look back. It’s relatively hard to miss if you’re on the correct trail.

Where in the World is Pothole Falls?